The ellipse assemblage model with imperfect interface has quite complex microstructure, that can be considered an extension of the circle assemblage model with imperfect interfaces. The paper introduces an approximate method for computing the effective conductivity of isotropic composites with imperfect interfaces in two-dimensional space. Based on the coated-ellipse assemblage model and the equivalent inclusion approximation, one can determine the effective thermal conductivity of the composites. The polarization approximation is given in an explicit form (PEK) and this method will be applied to calculate the effective conductivity of the composite with Kapitza thermal resistance model. The PEK result will have compared with the Fast Fourier Transform (FFT) simulation and Hashin-strikman bounds (HS).

This is an Open Access article distributed under the terms of the Creative Commons Attribution License (https://creativecommons.org/licenses/by/4.0), which permits unrestricted use, distribution, and reproduction in any medium, provided the original work is properly cited.

Due to limited available information about the materials as well as the complexity of microstructure, the determination of macroscopic moduli of composite materials is not simple. Especially composite materials with imperfect contact surfaces, this model needs to have its own approach solution, that will be presented in this work. Determination of macroscopic properties of composite materials from the properties of the component materials and their microstructure (homogenization) is the subject of many studies in recent decades. There are only a few cases where macroscopic properties are determined exactly. The solution of the problem of homogenization can be divided into the following directions: The first one is to construct the upper and lower bounds on the effective properties based on variational principles [1–4], the second one is to develop the approximate methods using Eshelby's solution [5] such as [6–10]. Besides, with the fast development of computer science, the numerical methods [10–15] have been applied in mechanics of materials and effective in solving complex problems. The objective of this research part is to present the methods (approximate-analytic and numerical simulation), which determine macroscopic properties of composite materials with complex microstructures. With complex inclusion such as coated-inclusions or those with imperfect interfaces, the fields inside and around the inclusion are complex, making more difficult the development of approximate models. Benveniste et al. [16] has developed two models of thin interface in the problem of thermal conductivity and elasticity, the model allows determining the fields of adjacent phases without these fields of interphase itself. Le Quang et al. [17] have been derived the closed-form expressions for the effective conductivity of anisotropic multiphase composites with imperfect interfaces by using the Eshelby's formalism and dilute solution results. Yvonnet et al. [11] have used XFEM method to the thermal conductivity of the material with imperfect interfaces. Monchiet [15] has developed algorithms based on XFFT to simulate discontinuous phenomenon of temperature between the phases (phenomenon Kapitza). Nguyen [12] has developed a simple approach to approximate macroscopic properties of the material in this case by replacing the coated-ellipse inclusion by a homogeneous equivalent inclusion. Many authors have mentioned the phenomenon of imperfect interfaces but most applications of these studies are based on the solution of circle-inclusion models. This work focuses on the conductivity of ellipse assemblage model with imperfect interfaces, in which the solution for this problem is based on polarization approximation (PEK) with elliptical Kapitza thermal resistance.

. Because elliptical inclusions of phase 1 coated by the infinitely thin shells, we can consider a uniform thickness interphase. 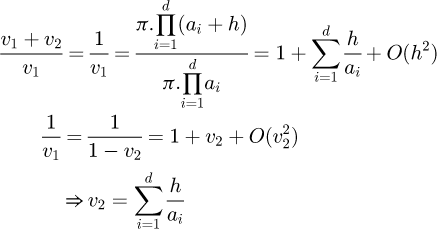 (2)where D is the respective inclusion-function. In the case of two-dimensional space (d = 2) with the same aspect ratio r = a2/a1 in a continuous matrix, one has

On the other side, we used the polarization approximation for two-component, the effective conductivity Ceff has form

(4)where the reference parameter c* should be determined from a reference dilute solution result, or reference effective conductivity of the composite at certain finite volume proportions of the components. Note that, function PC(c*) is a positive monotonous-increasing function of the positive parameter c*.

(5)the respective reference parameter c* should lie within the limits

The polarization approximation (4) using dilute solution reference (2) or equalizing (4) and (2), one finds the reference parameter c* in the two-dimensional space (d = 2)

Substituting (7) into (4) after some manipulation, one obtains

(9)where α is called the Kapitza thermal resistance.

Based on (9), (8) and (3), one derives the asymptotic expression of the effective conductivity c1L of the assemblage of ellipse inclusions of phase-1 coated by the infinitely thin shells (phase-2) with thermal resistance α (Fig. 1) Especially, when r = 1, a1 = a2 = R, d = 2, we derive the asymptotic expression of the effective conductivity c1L of the assemblage of circular inclusions, that has been presented in [19]

For the coated ellipse assemblage model, if these coated inclusions are embedded in the elliptic shells of the matrix phase M, one obtains the effective conductivity of the elliptic assemblage with interfacial thermal resistance α (in the limit h → 0) between the inclusion 1 and matrix M components by replacing cEI for cI in (4), (7) and (8) (Fig. 2). The two-phase coated inclusions with imperfect interface are substituted by equivalent one-phase inclusions cEI = c1L (12), from (7) we have

The polarization approximation has the form (PEK)

The polarization approximation (14) contains all the components of the coated-ellipse assemblage model with imperfect interface such as c1, cM, α, a1, a2. So, one can apply the simple polarization approximation (14) to obtain an estimate for the effective conductivity of the original elliptic inclusion with imperfect interface.

Transverse isotropic unidirectional fiber-reinforced composite is well presented by polydispersed coated ellipse cylinders, whose phase boundaries are cylindrical ellipse surfaces, with generators (in x3-direction) orthogonal to the plane of isotropy (Fig. 1). Consider a composite reinforced by fibers aligned in the direction x3. The ellipse inclusions are periodically distributed in the directions x1 and x2. The contact between inclusion and matrix is the imperfect interface of Kapitza's type. This problem can be modelled as a composite of three-component: Inclusions (v1, c1), matrix (vM, cM) and interphase with volume fraction v2, conductivity c2 = h/α (Fig. 2). By substitution scheme, one can consider the two-component of coated-ellipse with perfect interface in which the conductivity of equivalent inclusion is determined by (11)

The main content of the FFT method is based on the known equations, equilibrium conditions and the Fourier transform of the gradient E(x), flux field J(x), the second order local conductivity tensor of the heterogeneous medium C(x) to establish Lippmann-Schwinger integral equations for heterogeneous material problem and use of the Green periodic operator.

The FFT results in a special case r =1, a1 = a2 = R which were compared with results of Monchiet [15] for square model with one circle inclusion in the unit cell (Fig. 2), the unit cell having the dimension L = 1 along each space directions containing inclusion with the dimensionless radius R varies from 0.1 to 0.5. The conductivity of the equivalent inclusion is determined from (13). The result of comparison is reported in Table 4, those are completely close.

Comparison of results (Ceff) of FFT, PEK and Monchiet's results for square model with one circle inclusion in the unit cell α = 1, a1 = a2 = R.

In the text
Table 2

In the text
Table 3

In the text
Table 4

Comparison of results (Ceff) of FFT, PEK and Monchiet's results for square model with one circle inclusion in the unit cell α = 1, a1 = a2 = R.